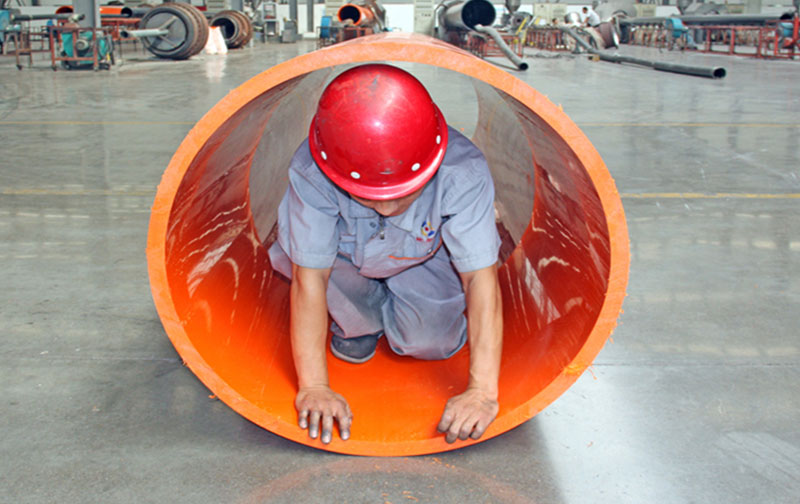 According to the research achievement in anthropometry by its pioneer named A.R.Tilly, a famous America expert, it can be known, when people is moving by crawling, in a relatively comfortable way, normally the crawling height is 800mm, so the diameter of the round pipe should be no less than 800mm for people crawling across the pipeline escape passage. Meanwhile, by considering the real situation in the road tunnel construction site, the outer diameter of the emergency rescue passage should not be too large, or it may effect the construction more seriously, therefore the diameter of the UHMWPE escape pipe produced by our company is DN800mm with a wall thickness in 30mm.

1. High Impact Resistance: when the UHMWPE pipe was attacked by a strong outside force, it would deform instantly, but the pipe would return to its original shape by absorbing a huge impact strength.

2. High Ring Stiffness: the pipe has a good pressure resistance, and not easy to be deformed, so its pressure resistance ability and the ability to resist environmental damage can be much better than the other pipes when the collapse accident is happening during the road tunnel construction.

3. Anti-aging: the UHMWPE pipe has an excellent property in anti-aging.

4. Light in Weight: the weight is just about 1/8 that of steel pipe, easy to be installed and handled.

5. High Toughness: the elongation at break of the UHMWPE pipe is no less than 350%, which is showing an extremely strong toughness.

6. Easy Connection: the pipes can be assembled together flexibly with a reliable safety.

1. The pipes and the jointing parts should be prepared well according to the stocks around the tunnel, the excavation types and the situations alike on the construction site, at the same time, beside the whole section pipes, there also should be enough short-section pipes in a length of 1m, 2m, 3m being prepared, as well as the elbow pipes( 135°)for the piping system.

2. It needs to do some temporary measures to fix the UHMWPE escaping pipe onto the ground, and an temporary cover can be made for the pipe ends during the construction which should be easy to be opened or closed.

3. Lay the UHMWPE pipeline along the side of the tunnel which has been supported up for it into the tunnel face, a working rope should be placed inside of the pipeline for the purpose of escape, dealing with an emergency, communication and transmission of kinds of goods, when connecting the socket UHMWPE escape pipes, chains or other measures can be used to prevent the separation of the connected pipes during the collapse of the tunnel.

4. When moving the tunnel lining trolley into its place, it needs to remove the UHMWPE escape pipeline temporarily, then dismantle the part one section by one section, and to ensure its working all the time as an escape piping system, it is forbidden to dismantle all the pipe sections of that part in one time.

5. When the piping system have to go along with the steps, the 135°elbow pipe can be installed as the adapter, the height and the length of the pipes supported by stilts will not obstruct the operation of the construction is appropriated.